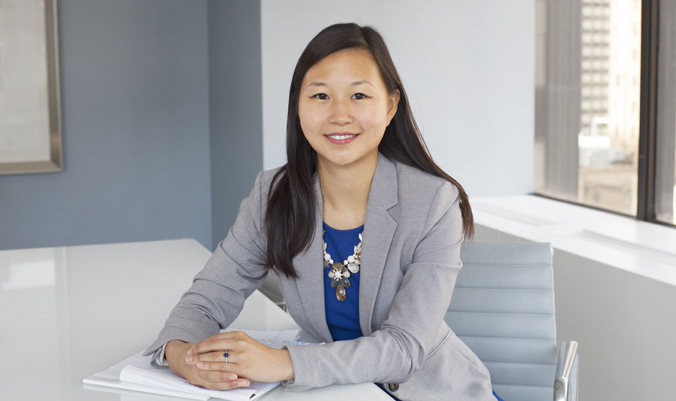 Erica has extensive pro bono experience in cases involving immigration issues, civil rights, and reproductive justice before federal district courts and courts of appeal, and advocacy to the U.S. Department of Justice.

Erica Lai is a commercial litigator focused on antitrust, class actions, and white collar defense. She has counseled corporate and governmental clients litigating at…

Obtained dismissal of copyright infringement and breach of contract claims relating to a leading pharmaceutical drug, and subsequent appeal to the U.S. Court of Appeals for the Seventh Circuit.

Represented railroad in Court of Federal Claims breach of contract and takings cases against U.S. Army Corps of Engineers for commandeering property for federal floodwall projects without just compensation.

Briefed and argued appeal in the U.S. Court of Appeals for the Sixth Circuit, successfully challenging the dismissal of an inmate’s section 1983 action.

On behalf of the National Women’s Law Center and over 35 other women’s organizations, filed an amici brief urging the U.S. Supreme Court to confirm that Title VII’s prohibition on sex discrimination in the workplace does not exclude lesbian, gay, bisexual, and transgender workers.

On behalf of the National Women’s Law Center and over 30 other national organizations, filed an amici brief with the U.S. Court of Appeals for the Tenth Circuit challenging the insufficient remedies awarded to the first transgender employee in the country to secure a jury verdict of employment discrimination and retaliation under Title VII.

On behalf of the Innocence Network and Pennsylvania Innocence Project, helped persuade the U.S. Court of Appeals for the Third Circuit to allow evidence of a convicted individual’s actual innocence that was not presented to the trial court to act as a gateway to merits consideration of otherwise time-barred habeas claims.

On behalf of law historians, filed amici briefs in federal district and appellate courts regarding the definition of “emoluments” used in the Constitution.

Represents not-for-profit seeking records under the Freedom of Information Act from the U.S. Department of Homeland Security and component agencies regarding the treatment of vulnerable detainees in the Department’s custody.

Represented not-for-profit in advocating for the U.S. Department of Justice to open civil and criminal investigations.

Successfully challenged a state’s practice of denying driver’s licenses to immigrant youth authorized to live and work in the United States under the federal Deferred Action for Childhood Arrivals program.

C&G helped secure a victory in a case alleging that President Trump violated the Foreign Emoluments Clause of the Constitution by accepting benefits from foreign governments without seeking and obtaining congressional consent. C&G represents five legal historians who filed an amicus brief citing extensive historical sources demonstrating that the Founding Fathers shared the plaintiffs’ definition of emoluments. Judge Emmet Sullivan of the U.S. District Court for the District of Columbia, in denying Trump’s motion to dismiss for failure to state a claim, expressly stated that “[t]he Court appreciates the illuminating analysis provided by the amici,” and that “Amici Legal Historians soundly reject the President’s narrow definition of Emolument as inaccurate, unrepresentative, and misleading.”

This is the second time a district judge has relied in large part upon our legal historian clients’ brief in construing the Emoluments Clause.

Article:
View
Related Attorneys:
Christian R Everdell, Joanna K Chan, Erica Lai, David F Lisner,
Related Practices:
Litigation and Arbitration, White Collar Defense and Regulation, Antitrust and Competition Litigation
Offices:
New York, Washington, D.C.
C&G Achieves Precedent-Setting Ruling in Third Circuit
Cohen & Gresser helped achieve a precedent-setting ruling in the U.S. Court of Appeals for the Third Circuit in Jerry Reeves v. Fayette SCI, et al. (No. 17-1043), that clears the way for wrongfully convicted defendants to seek federal habeas relief where their trial counsel failed to present credible evidence of their actual innocence. There is a split among federal circuit courts over what type of “new evidence” of actual innocence is required before courts can consider the merits of untimely habeas corpus petitions that allege constitutional violations.  Some circuits consider evidence only if it is newly discovered after trial, while others permit evidence available at the time of the trial that defense counsel failed to present. The Third Circuit had not weighed in on the issue. Cohen & Gresser filed a pro bono amici curiae brief on behalf of the Innocence Network and the Innocence Project of Pennsylvania urging the Third Circuit to adopt the broader newly presented standard, because the narrower newly discovered evidence standard would cut off a pathway to exoneration for innocent individuals whose attorneys failed to present exculpatory evidence at trial. In a precedential decision on July 23, 2018, the Third Circuit agreed, vacating the denial of Mr. Reeves’ habeas petition and instructing the district court on remand to consider his newly presented exculpatory evidence.
Related Attorneys:
Melissa H Maxman, Ronald F Wick, Erica Lai,
Office:
Washington, D.C.
Meet Our Newest Associate Hires

C&G welcomes the associates who joined the firm in 2016. "Our new associates are excellent lawyers and wonderful additions to the firm," said Managing Partner Lawrence T Gresser.

Erica Lai served as the moderator of a panel discussion titled “Promoting Women’s Professional Development And How Men Can Help – During the Challenges of the Pandemic and Beyond.” The panel was hosted by American Bar Association Antitrust Law Section’s Women.Connected committee.

Erica Lai moderated a panel discussion about protecting voter rights amidst the COVID-19 pandemic with three of the attorneys leading this important charge.  The panel was put on by the Asian Pacific American Bar Association of the Greater Washington, D.C. Area (APABA-DC), with the support of national and local minority bar associations.