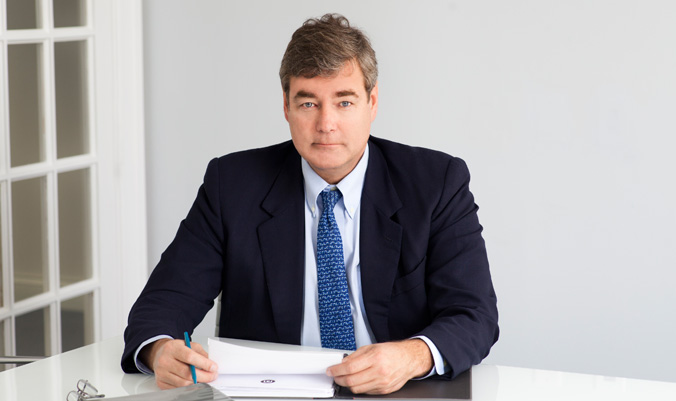 Prior to joining the firm, Bob practiced with Patterson, Belknap, Webb & Tyler LLP, where he focused on corporate law and corporate finance. He is a graduate of Georgetown University Law Center, where he was an Article Editor of the Georgetown International Environmental Law Review. Prior to law school, Bob spent more than a decade working in the oil and gas business in the Middle East, North Africa, the Asia-Pacific region, and South America in various petroleum engineering and management positions.

Member, The Society of Petroleum Engineers

Represented management of an energy trading company in connection with an acquisition by private equity investors.

Represented a Korean distributor of biotech products in connection with the sale of the business to a global life sciences company.

Represented the U.S. arm of one of the world’s leading cosmetic companies in connection with the acquisition of substantially all of the assets of a U.S. company.

Represented an international oil and gas exploration and production company in connection with its disposition of oil and gas assets in North Africa.

Represented Fortune 50 healthcare manufacturer in connection with the acquisition of an e-commerce division.

Represented a healthcare advertising company in a $250 million merger with one of the world’s largest communications group of companies.

Represented management in a management buyout of the stock of a hearing aid manufacturer.

Represented selling stockholders in the sale of all securities of a real estate holding company.

Represented Russian investment bankers in the analysis of a proposed sale of a U.S. oil and gas company with oil and gas interests in the former Soviet Union.

Represented a technology manufacturing company in the sale of substantially all of the assets of its instruments division.

Represented a healthcare device manufacturer in a $40 million secured financing for the acquisition of product lines from a Fortune 50 manufacturer.

Represented a health care device manufacturer in a $75 million syndicated financing with secured credit facilities in the United States, the Far East, and Europe.

Represented acquisition vehicle, as borrower, in $30 million secured term loan and revolving credit financing of management buyout of the securities of a manufacturing company.

Represented Korean company in connection with strategic equity investments in the U.S.

Represented an investment fund in connection with equity investments in private companies.

Represented a foundation closely associated with a major investment bank in connection with the foundation’s venture capital type investments in education companies.

Represented angel investor in connection with a venture capital investment in a web mining company.

Represented a Russian angel investor in connection with a purchase of a significant stake in a company with mining operations in Venezuela.

Represented an emerging web-based technology company in an early round private placement.

Represented investment advisor and software company in a private placement.

Represented foundations and venture arms of financial institutions in the sale and purchase of interests in various funds.

Represented an oil and gas exploration and production company in connection with international joint venture advice.

Represented a life science company in the resolution of disputes relating to a joint collaboration and development of a medical device product and the manufacture, production, and marketing of the product.

Represented a manufacturing company with various corporate matters and supply and distribution agreements.

Represented a healthcare marketing and advertising company in connection with joint ventures and business alliances.

Much of modern corporate governance law turns on the roles of independent directors, but determining who is an independent director is often a complicated task, with separate state law, regulatory, and exchange standards that have evolved over time.  This article looks at key recent developments and provides a field guide for general counsel trying to understand what independence really means.

With the recent increase in enforcement of the Foreign Corrupt Practices Act (FCPA), it is prudent for counsel to conduct in depth due diligence when acquiring a foreign target. Their conduct may become your company’s FCPA liability.

A recent arbitration ruling which determined that Kraft Foods Group/Mondelez International Inc. must be paid more than $2.7 billion by Starbucks Coffee Company to conclude a lengthy breach of contract dispute, is a venti wake-up call to inside counsel negotiating long-term ventures, supply and distribution agreements, and other commercial and strategic alliances.

The SEC adopted amendments disqualifying private securities offerings involving felons and other “bad actors” from relying on the Rule 506 safe harbor exemption. The lesson learned here is to know who you are dealing with especially when it comes to large investors, brokers and even potential targets and acquirers. Questionnaires and other fact-checking exercises should now be part of the due diligence process.

Publication:
InsideCounsel
Related Attorneys:
Robert J Gavigan
Related Practices:
Corporate, Regulatory Compliance
Office:
New York
Compliance: In Re Trados and What It Really Means to Inside Counsel
The Delaware Court of Chancery recently found that the board of Trados Incorporated did not breach its fiduciary duties in approving a merger of its company with SDL plc, even though the common stockholders received nothing, and the majority of directors approving the merger were conflicted through their relationships with the preferred stockholders. Trados is a reminder to boards to run a tight ship during the sales process.
Publication:
InsideCounsel
Related Attorneys:
Robert J Gavigan
Related Practices:
Regulatory Compliance, Mergers and Acquisitions, Private Equity and Venture Capital
Office:
New York
Regulatory: Why the SEC’s Proposed Pay-Ratio Rule will Increase Compliance Costs

The SEC is firming up their controversial proposal for new regulations under the 2010 Dodd-Frank Wall Street Reform and Consumer Protection Act, which will require certain public companies to disclose the ratio between CEO compensation and the median pay of rank-and-file employees.  Counsel to such companies are urged to advise clients on the potential backlash from investors, competition, and otherwise.

The choice of entity in which to conduct your business is significantly affected by tax considerations.  This session will provide a business and corporate law perspective on the various pass-through entities recommended for tax reasons by the preceding speakers by considering the non-tax issues in doing business as a sole proprietorship, “S” corporation, partnership or limited liability company.